Climate change is the most important, all-encompassing threat to humanity in our history. Here are some of the myriad ways it will affect us.

The global average temperature is influenced by three main factors:

the amount of solar radiation that reaches our atmosphere

e.g. from volcanoes, blocking solar radiation from entering our atmosphere

As one might expect, the more solar radiation that reaches our atmosphere, enters it, and gets trapped within it, the hotter our average temperature becomes. All three of these factors work together to maintain the delicately balanced climate necessary to sustain much of Earth’s life.

So what’s to blame for our current warming?

Over time, insolation is pretty predictable. The sun’s output follows an 11-year solar cycle, and the amount that reaches our surface depends only on our orbit and axial tilt – also very predictable things by now, if clothing store prices are anything to go by. The effects of increased insolation are obviously quite hard for us to prevent, but thankfully they are short-lived and not responsible for our current warming trend.

The amount of particulates in the Earth’s atmosphere, from things like volcanic eruptions, is much less predictable, and can have more noticeable consequences. The diagram to the right, taken from NOAA data, shows the reduction in solar radiation passing through the atmosphere at the Mauna Loa Observatory after some recent volcanic eruptions in the area. At an extreme level, the volcanic eruption of Huaynaputina in 1600 caused the coldest year in six centuries, leading to the Russian famine of 1601-03 which killed two million people. Lucky for us again, beyond these short timescales, eruptions don’t factor into our calculations. 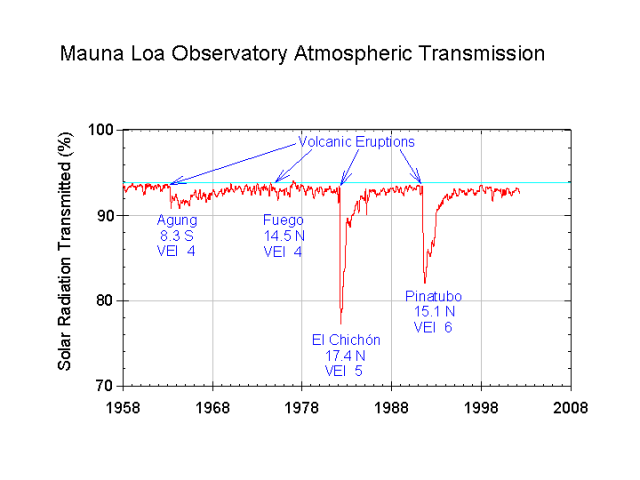 This leaves us with greenhouse gas levels, which have also risen and fallen historically in less predictable ways. Carbon dioxide, being the product of animal respiration, is the most common of these, and a graph from NASA of its prevalence in the atmosphere over time is on the left. Despite the graph’s erratic, spiky nature, one big spike in particular might stand out to you.

In short, while all three of these factors – insolation, particulates, and greenhouse gases – can contribute to changes in Earth’s temperature over time, the most significant and pressing factor in our current period of warming is the accumulation of man-made carbon dioxide and methane in the atmosphere. We must change our habits dramatically if we are to reverse this warming trend.

Increasing average temperature does more than just melt polar ice. With each fraction of a degree of warming, more energy from heat is built up in the atmosphere, which is then dispersed by bigger and more destructive weather events. Heat also changes how weather is distributed around the Earth by affecting the speed of the jet stream, putting infrastructure and people around the world through unfamiliar weather conditions and endangering ways of life across the planet.

Just some of the effects of climate change are:

Severe weather events such as hurricanes and flooding are amongst the most devastating effects of climate change. Loss of life and property, contaminated water, and the spread of waterborne illnesses are common fallouts of water-related disasters.

In the coming decades, rising sea levels are expected to put 10 million more people at risk of flooding, forcing millions to leave their homes and become climate refugees.

Increased temperatures lead to longer and more severe droughts. Researchers found that without efforts to reduce emissions, yields of vegetables would be cut by about 35 percent in the second half of this century.

Crops lost to insects will also increase. When temperatures are higher, the body temperature of insects is also higher, leading to increased energy demands. The result is more insects consuming more food. Two degrees of global warming could double the volume of wheat that is currently lost to pests.

What all of this results in is higher food prices, less stable food supply, and general food insecurity.

The world’s increasing temperatures will lead to longer and hotter heatwaves.

Heatwaves are deadly. Dehydration and heat stroke are common heat-related fatalities, and heat can exacerbate many underlying conditions. The 2003 European heatwave was estimated to have led to the death of 70 000 people – and that was less than 1°C of warming.

Increased temperatures cause drier conditions, which lead to an increase in wildfires.

Wildfires are extremely destructive of land, human life, and wildlife. Increased fire risk is especially true in the western and northern parts of North America. The USDA Forest Service says just one degree of annual temperature anomaly, which we’re already approaching today, has led to a 600% increase in median annual burned area in some forest types, and is a significant cause of the annual wildfire season having extended over two months in duration longer than average.

As temperatures and waters rise, disease-carrying ticks and mosquitos will thrive in the hot and humid climates.

Vector borne illnesses, such as malaria, Zika virus, Lyme, and West Nile Virus are already increasing. In the past 13 years, mosquito and tick borne diseases have increased threefold in the US. By 2050, it’s estimated that 68% of California’s populations will be at an increased risk for West Nile Virus with current climate change patterns.

Climate change is a multi-pronged problem. Tackling it requires a multi-pronged solution. As the Trajectories of the Earth System paper puts it, we have little choice in whether or not to act, but many choices of actions to take:

“Collective human action is required to steer the Earth System away from a potential threshold and stabilize it in a habitable interglacial-like state. Such action entails stewardship of the entire Earth System—biosphere, climate, and societies—and could include decarbonization of the global economy, enhancement of biosphere carbon sinks, behavioural changes, technological innovations, new governance arrangements, and transformed social values.”

To the layman, some of these actions may sound daunting and unconquerable; but many of them are already in progress in small scale across the world. Additionally, commitments to actions such as making behavioural changes and transforming personal values are easy for individuals to undertake.

The real solutions, however, will come from the largest-scale actions mentioned in Trajectories: decarbonization of the global economy, with new, greener technology. This means completely revamping how the modern production system works, and changing how the developed world maintains its high quality of life.

Renewable power is the surest, most readily available, and most broadly applicable method for reducing our greenhouse gas emissions across the board.

One of the most common arguments against switching to a renewable power grid is the claim that renewables are simply not ready to roll out for mass use. Below is information on the current state of renewable energy sources:

Wind power is generated by the turning of a turbine via a wind-catching fan – and, since the wind is free, operational costs are nearly zero once a turbine is erected.

The biggest individual wind turbines generate enough electricity in a year (about 12 megawatt-hours) to supply about 600 U.S. homes. Wind farms have tens and sometimes hundreds of these turbines lined up together in particularly windy spots. Smaller turbines erected in a backyard can produce enough electricity for a single home or small business.

Wind power generation is also rising exponentially to meet demand; from 2000 to 2015, cumulative wind capacity around the world increased from 17,000 megawatts to more than 430,000 megawatts. With a focused push from governments, that number could skyrocket.

One drawback may be that the slowly rotating blades can also kill birds and bats, but not nearly as many as cars, power lines, and high-rise buildings do.

Solar power is energy from the sun, captured in electrovoltaic panels and stored in batteries for use.

While some have described solar power as “unreliable” due to how solar PV panels stop producing electricity when the sun goes down or is heavily shaded, the fact is the rising and setting of the sun is easily calculated, and while clouds may be a bit less predictable, we do also have fairly good seasonal and daily projections for the amount of sunlight that will be received in different locations.

However, there are a couple of key things to note regarding this solar “disadvantage”. Firstly, our days more or less follow the movement of the sun. At the time of the sun’s greatest height and visibility, humans tend to be most active, and using the most electricity. Secondly, this fact also makes electricity more expensive in the middle of the day, making potential solar-generated electricity more valuable, as peak use hours would also be peak production hours.

All in all, this makes solar power an extremely reliable source of energy, which is already being used effectively today. In 2017, cumulative solar capacity reached almost 398 GW and generated over 460 TWh, representing around 2% of global power output. While this is not high enough to significantly reduce our emissions, it proves that the technology is sound, especially when used in conjunction with other forms of renewable energy such as wind.

Each of these technologies is currently available, even on the consumer scale, and represents a way to significantly reduce the carbon emissions of developed society.

Unfortunately, one of the most common arguments heard against these technologies is that the cost of switching is too significant to justify leaving the current oil-and-coal-powered infrastructure.

While it’s true that the cost may be significant, this argument is misguided at best and disingenuous at worst, as the ongoing cost of not switching is far greater than the costs any other plan could incur. This is visible in a few ways:

Estimated subsidies (to fossil fuel companies) are $4.9 trillion worldwide in 2013 and $5.3 trillion in 2015… China was the biggest subsidizer in 2013, followed by the United States, and Russia, the European Union, and India. Eliminating subsidies would have reduced global carbon emissions in 2013 by 21% and fossil fuel air pollution deaths 55%, while raising revenue of 4%, and social welfare by 2.2%, of global GDP.

The numbers are vast, and clearly indicate that taxpayer money is being funnelled en masse to fossil fuel corporations who not only do damage to the Earth system, but profit off this model, too. Why are we still supporting these heavily polluting and ancient industries with taxpayer dollars?

2. Climate change is already costing us billions of dollars yearly, and will only cost us more the longer we put off tackling it.

According to insurance giant Munich Re, natural disasters cost the world a hefty $160 billion in 2018, and climate change was a factor affecting the strength of those disasters. Globally, damages amounted to $160 billion, which is less than the $360 billion in damage reported by the company in 2017 but still higher than the $140 billion long-term average. A third of that total ($80 billion) came from just four events in the United States. It was the fourth-costliest year since 1980 in terms of insured losses, and notably the fourth-warmest too.

The longer fossil fuel companies are allowed to emit without limits, the more money the world will be forced to spend rebuilding cities and infrastructure from worsening storms. Why not eliminate this deadly and tragic possibility by rebuilding our infrastructure intelligently now?

Ultimately, despite technological progress and a changing social attitude towards environmentalism, the planet is still on track for upwards to 2-3C of warming. If we are to avoid the Hothouse Earth scenario, and keep our agriculture, economy, and civilisation stable, we need to address the climate problem NOW. These goals can only be accomplished with the willing participation of governments and direct, drastic mobilization of their resources. Governments won’t address this problem without motivation – and it’s up to us to provide it.